Painting from a Photograph

I learned to paint from photos when I was a student at Stony Brook University. The professor was Malcolm Morley, who taught to paint using the time-honored grid system. I've done several over the years, and they are my most popular paintings! This oil on canvas of a male mallard, 24" x 18", was completed last week. I took it to my brother Craig to get a critique -- he is a duck hunter and carver -- and he told me the position of the beak and head indicate the mallard is angry. 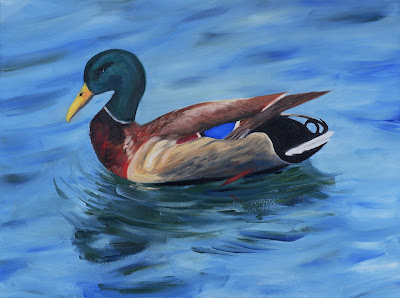 So there is the title: Angry Mallard!

Malcolm Morley was a British photorealist painter. He lived in Bellport, NY, and passed away last year. My uncle was his butler for a while. I studied painting at Stony Brook in the early 1970s. I didn't register for any of Morley's classes, but he taught in the same studio as my professor, Ed Countey, so students got lectures and critiques from both.
Posted by Linda Prentiss at 11:21 AM

Linda Prentiss
I've been a visual artist all my life. I teach and exhibit my paintings, drawings and etchings. I'm especially interested in printmaking and the possibilities of producing multiples in a limited edition. Each work is original. I pull my own prints rather than working with a master printer. I'm fascinated by the process. When a print is passed through the etching press and is pulled from the plate, it is magic to me! All art work copyright Linda Prentiss. Do not use without permission.